The certainty of a tested, certified and insured insulation system

It’s a matter of warranty

The thickness of the plaster layer is one of the most important parameters with which to measure the Insulation System performances, because it guarantees: 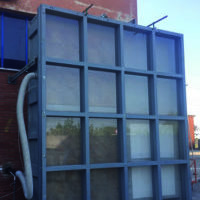 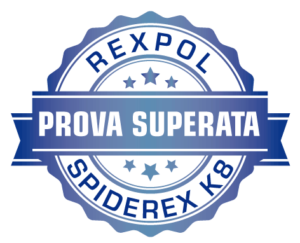 To facilitate designer’s task, that is to guarantee the safety and efficiency of the building and its elements in relation to the wind force, we have tested the spideREX K8 system with a specific test program; the aim was to verify the behavior of the System when varying the applied wind force.

In coordination with the Institute for Construction Technologies (ITC) and the National Research Council (CNR), the spideREX K8 system was tested with two types of finishing:

The results demonstrated the “plate-like” behavior of the RXM3 plaster, that confers the entire spideREX K8 Safe Insulation System a significantly higher resistance to wind, in comparison with traditional systems.

Specifically, the test has been interrupted at 1,680 kg/m2 due to the impossibility for the equipment to further stress the wall.

The guarantee of high mechanical performances that remain constant over time, combined with the ideal hygrothermal behavior, even with finishes from different manufacturers

Maximum safety against fire with the “B-s1-d0 Classification”

The increase in number of civil and office buildings with ventilated walls, has made it necessary to deepen the theme of the fire propagation across façades, focalizing especially on two main aspects:

The spideREX K8 Safe Insulation System can also be used for insulating buildings with ventilated walls since it has obtained the “B-s1-d0 classification” of fire resistance, the maximum possible for a system consisting of insulating Expanded Sintered Polystyrene panels.

The tests has been carried out in compliance with the UNI EN 13501-1: 2009 standard, fire classification of products and construction elements.

Maximum safety against fire with the B-s1-d0 classification

At one of the most authoritative European testing laboratories, have been tested the thermohygrometric behavior, the impact resistance and the bonding strength of the spideREX K8 System ennobled by finishes from different manufacturers.

The test wall, transferred to the hygrothermal chamber, has been subjected to 80 heat/rain cycles and then to 5 freeze/thaw cycles, representative of the state of the wall after 25 years. Different types of finishes has been tested with this method.

At the end of the test, the wall showed no sign of swelling, peeling and/or degradation. Test passed.

The impact resistance must be defined according to the deformations generated by a rigid and non-deformable body, thrown against the wall with an energy of 3J and 10J.

The portion of the wall where the colored coatings have been applied, has been evaluated to be a “class I” while the area without finishing, a “class II”.

The binding force has been measured on the wall portion with various types of colored coatings. The different finishes showed the same behavior, that is they did not come off the support (RXM plaster) and did not show any defect.